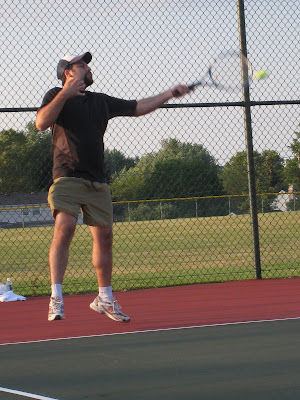 I went to another tennis lesson today. Usually, I hit my backhand with the left foot forward, but today I was told to keep an open stance (feet square to the baseline), and simply pull through the ball by torquing through it with my core. That was a difficult shot to accomplish. I hit most of my attempts into the bottom of the net. I suppose my core is just weak. I only managed to get a few over by the end of practice.
------------+-------------
-   -    -   -
Above are the different points that I want my ball to cross the net on serves. The left serving box markers are for a ball to go up the middle on the ad court. The right serving box is to hook a slice into the corner or create a body shot. I was very successful in translating these amendments into my game.
Before the lesson was over, I was able to ask the professional about teaching beginners to play tennis.
"How would you do it?" I asked.
"I would just work on footwork. Do about two months of footwork. Then show grips and have them shadow me. After that, you can start hitting the ball, and go right into the serve - having them do the first stage of just hitting the ball and kicking the leg up; second stage of walking through the ball; and third stage of creating the bend in the knees."
"So it's all about the footwork?"
"A lot of time people think there's something wrong with their swing when they miss a shot, but that is minimal. You can simply adjust up and down. The big issue is getting to the ball, and doing it in the correct way. Footwork is what it's all about."
"Good to know."

After tennis, my brother, Panauh, told me that all my songs are weird and experimental. I told him I was rock/pop/electronica.
"No," he said. "Your shit is experimental."
"Really?"
"What do you think it is?"
"Rock/Pop mostly."
"Where's your drums?"
"There are drums."
"I mean, live drums."
"I can't play the drums."
"I don't know, dude."
"It sounds pretty poppy to me."
"You don't know, Pirooz."
For some reason, I am consistently touted as an idiot by my brothers. The youngest, who is involved with music, listens to all the music I do with a scowl on his face. And the other brother dismisses all my film ideas as provincial and not worth making for their low-revenue-been-there-done-that perspective. Thank God I have the common sense to leave their stories on the unwelcome mat outside my heart, because if I ever took their critiques as legitimate, I might not be able to walk the next morning - I swear it's as close to being critically raped as any old-fogie-Muppet could accomplish.
Anyway, Panauh did just work on the RZA album, and he has agreed to help me mix a song I am doing with Chris Killen, so I forgive him his trespasses. Who knows? Maybe, I can call up the next famous musician he produces, and ask him or her to classify my record. Hopefully, they'd say "electronica". If not, and they said "experimental". Then I'd have to face the fact that no matter what I do it will most likely be on the fringes. I guess it's where I gravitate. I swear though. I thought my songs on the last Swingers record were pretty pop.
I am off to play a video game.
Posted by Pirooz M. Kalayeh at 11:33:00 AM

i love siblings.
rza...thats big.
experimental is such a good thing.
like animal collective's sung tongs.
that is the besttttttttttttt

I say pop. But, what the hell do I know? Think putting your work into a classification might just be impossible. Same with your prose. We feel pop, open to the people, but the people in charge say not pop. They say experimental. So we head to those guys and those guys say pop. I think you are just Pirooz.

I hear you, Lindsay. Siblings are pretty dynamite. I just went with Panauh to a place in Pittsford called "Sports Clips". We got haircuts and bought leave-in conditioner. That was fun. Now we're going to go to an Apple Store and get a pair of headphones for my dad's birthday. I am going to pick the experimental looking ones. ; )

I just bought a Randy Newman song called "Korean Parents". It doesn't sound Korean at all. So Hee called it Chinese. Check it out on iTunes.

Pop is short for popular. That changes over time. Experimental today could be delicious tomorrow. Just look at that old sub sandwich in the fridge. Most would think a soggy thing like that would give a person indigestion. I know different though. I've experimented past the newness of things. I've been in dumpsters and seen how soggy can be the nouveau riche. Who knows? Whole milk gone sour could be just as irresistible.

Good blog... Thanks for your valuable efforts Good going, Really it's a good blog