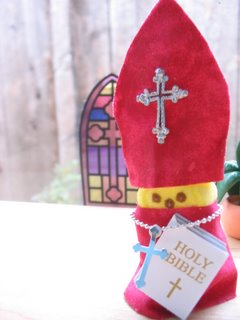 Peeparazzi is being displayed at the Ghettogloss Gallery. It will be up for the next several weeks, so get there and make some purchases while you can. This fine bunny to my right is entitled, Peep John Paul. Believe me. He is just one of the many peeps out there. Peep Prince, in my opinion, really takes the mustard out of your lungs.

PK: This is so cute and funny it's ridiculous. Who came up with the idea?

Nadim Amiry: It was Tiffany's [Yeager] idea to do something with peeps, and then the three of us came up with a bunch of ideas one night over margaritas. We eventually paired them down to six. A few that we ultimately decided against are "peepsbu ghraib", "the village peeps", and my personal favorite "peep doherty". I think the six that we decided on represent a pretty broad cross section of both contemporary and historical entertainment and politics. I don't think we're trying to make any statements with the photos. Mostly, we did it because it cracked us up.

PK: These pieces are on display at The Ghettogloss Gallery. Was this the goal from the onset?

NA: Not really. Just seemed like a fun way to spend a few Saturdays.

NA: Not sure what the future holds for peeparazzi. depending on the response, we may feel compelled to do another set. Like I said before, a lot of ideas were put on the back burner.

NA: No plans to customize peeps at the moment, but now that you mention it, it's not a bad idea.

Email ThisBlogThis!Share to TwitterShare to FacebookShare to Pinterest
Labels: Interviews

hi peeps! this looks so good....i could eat it!

So funny. I am going to ask Nadim, if he can do one of me. I wonder what he'll say.

I might even ask him to read your blog, sprigs, and see if he can do one of you.