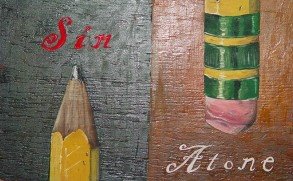 Curiology is a little funky company founded by visual artist Alie Ward. Originally from San Francisco, Ms. Ward relunctantly relocated to Los Angeles five years ago, and has become known for both her apparel line and her paintings.

Working almost exclusively on wood, Ward's paintings show a passion for the exploration of words as labels, and the elasticity of such when applied to simple illustrative images, as seen in her ongoing "Dichotomy" series. 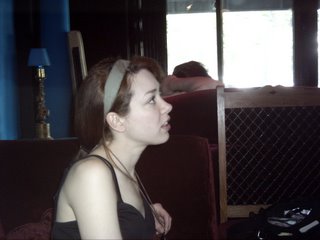 PK: What is a signologist? Is this your term?

AW: Did I call myself that? I'm such a dork. No, I'd say that, in a way, that's the fictional term for a field I'm passionately drawn to...(Technically, I would be a semiologist though...) One of my greatest attributes and downfalls is that there are so many -ologies I adore. Etymology, entomology, biology, curiology...

PK: Are you more inclined to oogle over a billboard or a Picasso?

AW: Hahaha. Amusing query, sir. I suppose the nature of billboards and marketing lies in their accessibility, so by virtue of sheer interfacing, I'm spending more time looking at the billboards, as they are all around me. And I could be flayed for saying this, but I'm probably more interested in the mechanism at work on the billboard. I often can't help but think about the plotting and the sheer social science that went down in a board room at some corporate HQ to get me to look at the billboards for a new zesty taco. I think what's interesting about signs and billboards is their drive to communicate something very specific, and what I love about painting is the crude use of signage to communicate ideas that are merely for the sake of the concept itself. There's a certain authority in creating a sign, and it takes the pretentiousness that is so rampant in art, throws it away and makes room for function and simplicity. I love love love making paintings that are very simply trying to communicate a verbal idea, I guess. Wow, I'm rambling.

Would you classify yourself as a writer or painter?

Professionally, recreationally, physically and mentally I am both. But I "write" my paintings as thoughts or sentences before I make them, so perhaps writing trumps it? Curiology literally means writing with pictures, so there you go. Both. 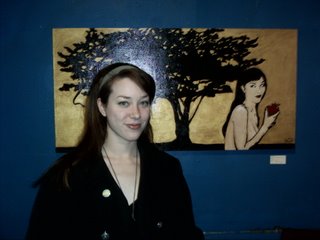 Will you be exhibiting in any galleries in the near future?

I'll be showing with the collective project: for their C-note show, and most likely with Cannibal Flower again soon as well, the a group show in Paris which is scheduled for April. Meanwhile, still doing illos and articles for the Weekly, running the shirt business, and doing commissions for clients. It's matter of having enough work to show really. I just took down a solo show yesterday, and I've had two full solo shows this year, so right now I don't have any available new work. Ah, the very day after a show comes down, and I'm plotting the next. Thank god for yerba mate, nature's answer to meth. Without it, I'd have to sacrifice an -ology or two. 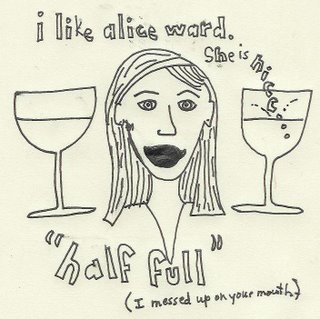 Alie Ward is a painter and journalist. She lives and works in Los Angeles. To purchase her paintings, check out her apparel line, or to experience her parched, dry wit with accompanying visuals, go to Curiology.
Posted by Pirooz M. Kalayeh at 4:37:00 PM

They will acquaint you with Barker's ways. Unfortunately, when he is called on his errors, he just keeps on using them.projector service toronto