A nice vice-versa on Robin Thicke's Blurred Lines video. Probably would have been better with a full reverse and using very masculine models. The male dancers don't come off particularly masculine, which would be the full antithetical response to the kittenish-models used in the now controversial vid.

Why I Love Spike Lee 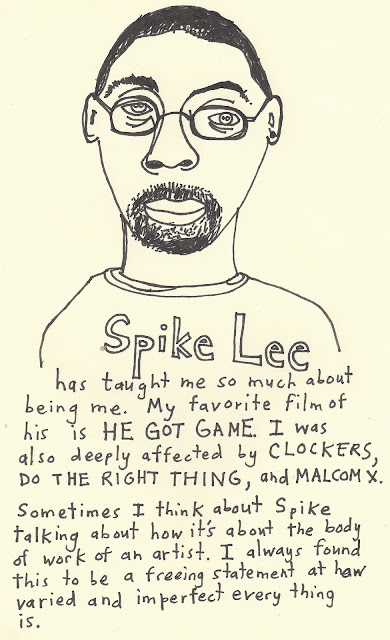 Other times I think about the last scene in HE GOT GAME. Jake Shuttlesworth (Denzel Washington) is standing in front of a basketball court facing the exterior wall of a jail with a basketball in his hands. A security gaurd is yelling for him to step back or he'll lose his life. Jake steps forward, looks again at the guard, and then throws the basketball over the wall. We see the ball sail in slow motion for a good while, as Aaron Copeland's orchestral theme reaches its peek. Then it's a match cut of sorts as the ball moves over the prison wall and lands literally and symbolically on the Big State basketball court. Jake's son, Jesus Shuttlesworth (Ray Allen), picks up the ball, smiles, and poises to shoot, as the camera tracks back behind the hoop and cut--
Posted by Pirooz M. Kalayeh at 10:45:00 PM No comments: 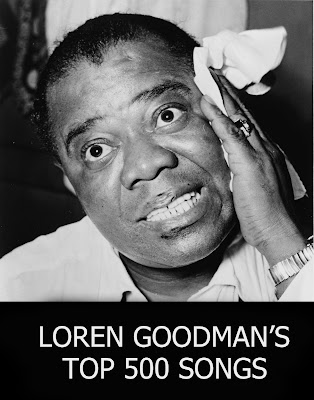 Loren Goodman is an artist, poet, boxing manager, professor, and friend. What follows is the 291-300 segment of his selection of the Top 500 Songs of all time.

These postings have been conducted sporadically since early 2008 to the present in increments of ten.

I dreamt I was a different person last night

I dreamt I was a different person last night. I was a professional soccer player or a really good amateur. I was also from a different country and of a different ethnicity.

It was very strange--almost like being on my own version of Quantum Leap.

My father--who was not my father--was the coach of the soccer team. He was letting me know in not-too-kind-of-a-way that my performance on the field was not up to par.

"I don't expect much from players who reach a certain age. I reduce expectations by 5%, so you can relax. You're too old to play hard."

The person whose body I was inside seemed to accept this.

I thought it wasn't entirely true. Yes, age slows you down, but the body felt young. It could do more.

That was the end of the dream.

Here's a snapshot from our short film BRUNCH ON THE FOURTH OF JULY. Apparently, one of Aaron's students has volunteered to edit it. I'm curious what will happen. I've completely let go of all control on this film. It's literally a rock in the ocean. 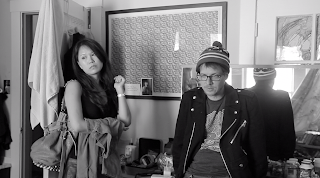 So I've decided to become thin again. I know what you're thinking. Why? Why not be beautful and gargantuian. It works for you in Hollywood. All the boys in your building love you.

It's true. I'm am an adorable "bear" in Los Feliz, and it's been fun to get cat calls on my walks along Sunset, but it's time for a change.

I first started swelling in 2003. This was after a break up and giving up cigarettes for the first time. After quitting 18 more times (the cigs, that is--the relationship quit itself), I was finally able to stay away, but I did gain about 40 pounds in the process.

Now I'm going to play a video game with my body. I will eat well and exercise and see if I win this game of Carb Invaders.

Sogee, the Gangstarr, is in charge of my diet. She has told me it'll be lots of veggies, which is fine with me. I'm bored of being a meat eater too, so I'm just going to be a vegetarian from now on out. She doesn't know this, but I figure I might as well. It's just one more thing to get done now.

To help me through the process, I will be doing some novel and film sketches. The novel will be called Comrade Stalin Is My Friend. The film is HAJIB AND THE WARRIORS OF THE STARDUST GALAXY.

I will post bits of these things as they progress. For now, here is a picture of me being a Carb Invader from Mars. 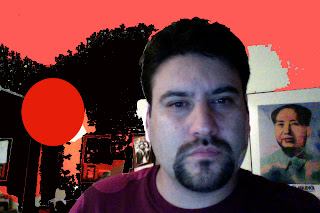