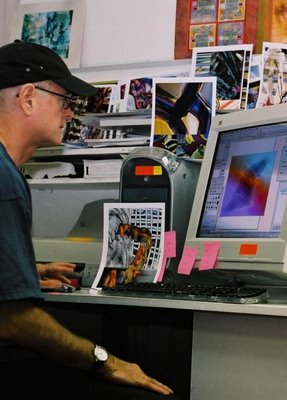 Bruce Deitrick Price is very clear about what works for him. He offers many of his ruminations on improve-education.org and his personal blogs. Earlier this month, we were able to chat about his process and what catalyzed his writing life.

P: What brought you to writing?

Bruce Deitrick Price: I tend to think that being an artist is like being a priest or an athlete. You're born to it, more than brought to it. In any event, I knew by 16 or 17 that I wanted to be a novelist.

Bruce: I don't know why that age. I was writing poetry well before that. I was painting in the 4th grade. I remember reading, probably the summer I turned 17, a sentimental novel by Rudyard Kipling about an artist who goes blind. I cried a lot over this book and decided: "That's what I want do, write books that move people."

P: That's interesting. I had a similar reading experience at 16. I got
suspended from school, and ended up reading Dostoevsky's "Idiot" and
then every textbook in the storage rooms at school. I remember one of
John Updike's stories being particularly moving, and I thought, "Yes,
I can do this. It's whatever I want."

What was it about Kipling's Light that moved you so much?

Bruce: The Light That Failed, summer, separation from girlfriend, teenage angst. But I'm sure Kipling did a great job; anyway, he got to me. At the same time, I'm uncomfortable mentioning this because I am not such an emotional artist. Rather more practical or intellectual or middle class. I have little patience with neurosis, purple prose or academic theorizing. Almost my entire aesthetic can be reduced to this: "I want to make new kinds of beauty." This has been a reliable guide in the digital art and the poetry. I can't say I normally achieve this in fiction, although I have nominated "American Dreams" as the Great American Experimental Novel. So that one, at least, was new and somewhat beautiful.

P: That's fascinating. You equate practicality with apathy. And the middle class is 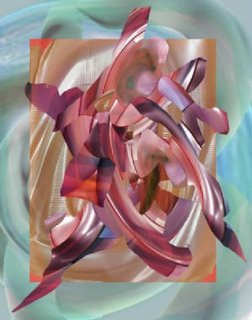 non-emotional? I have not ever heard that perspective. When did this idea blossom? This idea of apathetic beauty?

Bruce: Many artists have been drunks, taken drugs, lead extravagant lives, or created in erratic fitful patterns. Others, and this is more my style, get up every day and go, as it were, to work. Trollope, I think it was, got up at 5 AM and wrote three hours before commuting to his day job. It's important, I think, to keep the craziness, the extravagance, for the art itself. Eliot said you can look like an artist or be an artist. Ezra Pound doubtless said, No, I can do both. Point is, I guess, discipline and hard work are good middle class values. I have them and I think they serve me well.

(Assemblage One by Bruce Price)

My father used to say "focus like a laser" and "keep your eyes on the
prize." He liked those expressions. I can see their usefulness too.
It's what got him into his field and made him such a success. It's
really remarkable.

Somehow art and calisthenics don't go together for me though. I create
because I love it. I couldn't imagine doing anything else with my
private time. I dig the sharing.

In business, I tend to pick up my Starbucks Destroyer and shoot
lightning bolts, but even that seems a bit heavy handed at times.

Sometimes I wonder about letting things happen on their own. Just
being. Making choices. And being.

Bruce: I have this nice essay on Improve-Education.org called "MAX your creativity" that deals with experimental approaches to art and writing. Basically this means subverting your normal approaches. The Surrealists figure prominently here; but they made a god of being experimental. Too much. I think you use these tricks when you get stuck in a rut. That novel I mentioned, American Dreams, was written drawing random words from a dictionary. As the essay concludes: Whatever works!

P: Tell me more about the novel. How long did you draw random words
before it was an evolving entity on its own?

Bruce: I think it says in the essay that I thought I might need a new word every few paragraphs. To my surprise each word carried several pages, sort of a burst. The drawn word is still there in most of the chapters, in the first line. Disclosure. He decided to make a full disclosure. It seemed to be drifting financial, which I didn't like. So I steered it romantic and the rest just wrote itself. My only stimulant then and now is caffeine. And a sort of religious or ceremonial mood I tried to get in each night. I wrote two whole novels this experimental way, but not since. However, I did keep in my memory that sense of letting stuff happen, of being open to the random impulse. As the essay states, these weirder techniques are useful for people when they have burned out or become too logical and rigid. Dancing, metaphorically speaking, is a good aesthetic. If I write poetry now, it's concerned entirely with letting magic happen. How else did I get this:

a poem should electrocute
and be hairy like a kiwi fruit
P: Dancing through the process. I love that. Have you had the same experience on the business side of things?

Bruce: I should mention that Nietzsche speaks somewhere of dancing with a light foot. Aldous Huxley quotes Marlowe's "dance an antic hay" at the start of a novel. The Sufis celebrate dancing as a metaphor for ditching the cerebral...All those antecedents are in my usage.

As for the business side, I've never had a 9-5 job and never made a real living, although I was often trying, but in that somewhat scattered way of the artist/intellectual. In Manhattan I had my own little ad agency, and never hesitated to claim I was the best one-man show in the big city. In short, I liked business, and was good at business, and rarely had a client I couldn't help. However, even as I'm doing business and making money, I'm also writing novels that aren't making much money and painting pictures that aren't making much money. In sum, I'm working six days a week and making about what a cabbie makes but having much more fun, I would guess. And that's exactly how my life is today. But with the internet, there are new ways for the scattered artist/intellectual to try to beat the odds. And that is how I came to be interviewed by a stranger in L.A.

Bruce Deitrick Price has several articles, resources, and blogs. His novel, Too Easy, was published by Simon & Schuster in 1994 and has been translated into several languages. He is currently working on several writing projects. To contact him visit www.lit4u.com.
Posted by Pirooz M. Kalayeh at 9:36:00 PM

First, I want to thank Pirooz for interviewing me.

Second, it is odd to see the word "apathetic" used in connection with me. But I told Pirooz not to change it, because the broader issue is important. I suspect all artists, and all people, have to struggle with the question of how much passion, feeling, emotion and/or craziness they'll welcome into their lives and their work. Always a tough question.

Now it's 2016. Every time I Google myself, this long-ago interview comes up very high. I assume that's a credit to the blog master.

We are now in the e-book era. Two of the books mentioned here, American Dreams from 1984 and Too Easy from 1994, have recently been reissued as e-books. Too Easy is from Simon & Schuster, which means that this novel comes up all around the planet in ways that weren't possible even a few years ago.

I have self-published several e-books. This option is a great catalyst for me. I'm working on more projects than ever before in my life.