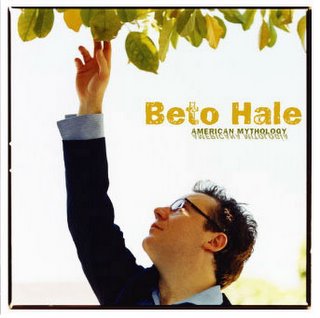 Music is one of the best ways I've found of communicating feelings, that are sometimes very hard or awkward to communicate any other way.

-Beto Hale
Beto Hale's American Mythology is out in record stores by March!

Pirooz: How long did it take to get this record together?

PK: Where did you record?

Beto Hale: A good part of it in my home studio in Colorado; about half the drum tracks were
done in Dallas, the other half at Denver University?s Lamont School of Music Studio. I also used two other great studios in the Denver area, Level 14 and Summit Road. Mixing and vocal sessions were done in Colorado and LA.

PK: What would you say is the overall theme? The record is called, American Mythology, was this a tongue in cheek response to your immigrant experience, or rather a celebration of what America has come to mean for you?

Beto Hale: One thread that goes through the whole CD is love. It sounds cliché, but all aspects are covered: loss, birth, hope, desperation, doubt. All are related in one way or another to love.

In terms of the title, in can be tongue in cheek, but also dead serious. I have mixed feelings about my U.S. experience. I have met amazingly cool people, and learned a great deal about music. I appreciate the efficiency, the honesty and the ethics of most of the people I've worked with. But I am also concerned about the growing xenophobia and the ignorance I have encountered about Latin America.

On the one hand, some people want to build a wall between the States and Mexico; are they out of their minds? I hope this trend does not get out of hand. Most of the arguments against immigrants make no sense to me. Here is the most powerful nation in the world, worried that they might lose their jobs to the poorest, least educated citizens of Mexico. And it really blows my mind how many Americans tend to forget they are all descendants of immigrants, except the Native Americans, of course, who seem totally ostracized from society.

On the ignorance side, I am really tired of people saying things like 'Are there really any white people in Mexico?' I mean, President Vicente Fox. Fox! It's an Irish last name. He is white! He is taller than Bush.

And, the other a cop asked me whether I was White or Hispanic, after writing me a ticket. I said, 'I don't know; you tell me!' She said: 'I am asking you.' And I answered, 'I really don't know; I guess I'm both,' which, of course, I am.

I am half Polish Jew, half 'WASP', born and raised in Mexico. Big deal; there are millions of people like me in Latin America. The new president of Chile is White, so is Argentina's President, who is of German background, I believe. And look at the royal Spanish family! Yes, America, millions of Spanish people are White!

Hispanic is not a race; if anything it is an ethnic or cultural category. Hispanics are White, Black, Mestizo, Mulato, Japanese, Jewish... All races and cultures. The U.S. is not the only melting pot, sorry!

That, my friend, is one American Mythology, right there: The endless categorization of people into comfortable stereotypes.

PK: I hear you. So how has having a child changed your experience of songwriting?

Beto Hale: My son was born in the last stages of production, but I did write a song, Te voy a guiar (I Will Guide You) during my wife?s pregnancy. It basically promises him that I will guide him through the path of love, no mater how screwed up the world is.

Beto Hale: Very soon. I've been offered help in setting up gigs, so I'll let you know as soon as I have some definite dates!

For those of you that do not know Beto, his music has its roots from his homeland of Mexico City, and branches to grassroots American folk, Liverpudlian dreams, and jazz in all its glory. As Hale says in a recent interview with CNN Radio:

The songs are in Spanish and English, and the influences are very British, and, but obviously also Latin American, I was born in Mexico City, so, I think it's an eclectic mix of music, that I think a lot of different people can identify with..."

Visit www.betohale.com to catch the latest from this musical virtuoso.
Posted by Pirooz M. Kalayeh at 9:01:00 PM

Email ThisBlogThis!Share to TwitterShare to FacebookShare to Pinterest
Labels: Interviews