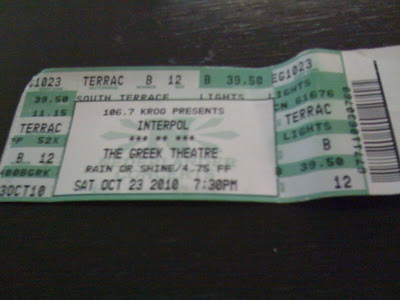 I saw Interpol with my brother the other night. I had not ever listened to the band. They had some great bass lines. I really liked the rhythm section. I didn't think much of the sparse, delay-soaked guitars. The vocals were also poor. The lead singer's range was two notes and his delivery was dependent on the bpm of the track. The lack of variety and fairly muted performance - other than the guitar player hopping on one leg occasionally in his best imitation of James Brown on acid and Mike Tyson swaying before a knock down - would make a person think that the band was absolutely horrid; however, the salvaging point for the group is the consistency in fashion and musical aesthetic that go together nicely and help forge a certain attitude, rather than a definite sense of musicianship (most songs were made of tasty bass lines with two textured guitars repeating similar chord structures from one song to the next). The consistency and aesthetic being sold was definitely admirable from a marketing perspective; it also creates a strong urge for me as an audience member to suddenly wear a tie and pull-over cardigan (not really, but you get the point). I would call this group a fashion designer's band. They will be a band that holds sonic dependency for people who listened to them at a certain age, and thus, need to return to those emotional pathways in the brain in later years when their early 20's are long gone. I suppose that's why it was no wonder that Chloe Sevigny was in line to get tickets in front of us. 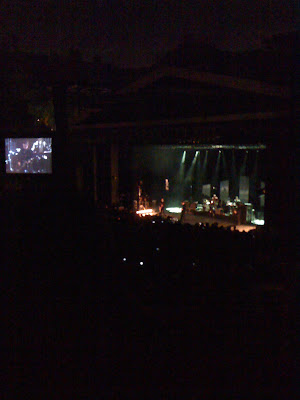 "They're going to steal your identity," she told my brother when he hesitated to sign for his tickets.

Later, as we were walking into the Greek Theater, my brother told us more about the exchange.

"She seemed cool. Fairly down to earth. She talked to me, right?"

"Sounds like she was hitting on you," I said.

I looked at her legs as she walked by us. She had nice legs. I would put her in a movie for those legs. I also like her in BIG LOVE. I think she's a talented actress and I like her choices.
"I like her fashion sense," Sogee told me later.
A Will I. Am song was playing in the car as we were driving to Garden Grove the next morning after the concert.
"Did you hear that Will I. Am is producing the Korean pop group, 21?"
"Okay," I said.
"He said that he likes Korea because it's exotic. You go to Europe and it's the same alphabet. You go to Korea and you can't read anything."
"That's the stupidest thing I've ever heard. He must be retarded."
"I'm just telling you what he said."
"I'm not putting you down or Will I. Am. I like some of his songs. I just don't want to hear him talk about anything. That just seems stupid."
"Yeah, I know. That's what I was saying too."
"I guess we speak the same exotic language."
I have no interest in hearing about how stars view the world. I just want to watch or hear what they do. End of story. I also have no interest in meeting movie or television stars except for Haley Joel Osment and Elijah Wood. I want to see if they'd be interested in doing some acting for SHOPLIFTING... It'd be better to talk to them in person about doing the movie rather than going through an agent. I'll take a walk around Venice Beach. I heard Elijah Wood lives in the area. Maybe I'll run into him. We can talk about Frodo. Maybe we can shoplift...
Posted by Pirooz M. Kalayeh at 4:04:00 PM 3 comments:

I enjoyed watching this. Those of you in Asia can watch things in America if you use strongvpn.com.
Posted by Pirooz M. Kalayeh at 10:41:00 PM 4 comments:

1. I have finished the first draft of SHOPLIFTING FROM AMERICAN APARREL. It is an enjoyable script. We are hoping to raise funds to film in Summer 2011.

2. Our documentary on Brad Warner has begun. Mark Parsia filmed in NYC last night. We will be filming in LA in November, and then again in NYC later in the year.
Posted by Pirooz M. Kalayeh at 1:47:00 PM No comments: 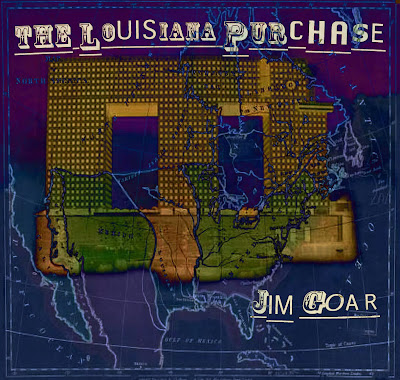 I told Jim I didn't have time to do a cover last night, but I couldn't help myself. I kept messing with the image for three hours. Messing with the fonts was the most fun. I hope this is something Jim's publishers will consider. I think it's hot shit.
Posted by Pirooz M. Kalayeh at 12:01:00 AM No comments:

I am almost done writing Shoplifting. At least a rough draft of it. I really like it. I read some of it to Grace and Ken. They didn't seem to really like it. Or maybe they liked it, but couldn't seem to make out what was going on. It's definitely a different kind of movie. We'll see what happens as a finish. Only a couple more days.

This is a YouTube movie Ken sent me. It's of a girl getting a beat down in Korea. I can't understand what anyone is saying. If you know someone who is Korean ask them to translate. If not, pretend this is what they say:

"Give me your seat!"

"I'll teach you a lesson then!"

I don't know what to make of the suicide or what you would call this next video. Please don't watch if you get easily squeamish.

I had a funny conversation with Nishijima Roshi on the eve of the publication of Hardcore Zen. I said, "Once this book comes out, if it sells well I'll become famous. Doesn't that go against what Dogen says about not seeking fame and profit?"

He said something like, "Dogen was talking about seeking fame and profit. You didn't write the book with the objective of becoming rich and famous. Sometimes you do something sincere and people like it, then fame and money come. In that case you deal with the real situation as it comes up."
Posted by Pirooz M. Kalayeh at 12:13:00 AM No comments:


Michael helped with the filming of this video. It was shot in HD on a Flip cam my brother got me for my birthday. I filmed some other stuff on another camera. That camera didn't shake too much. This one shakes at times, but I like the video quality better.

Tao and I talked about the SHOPLIFTING FROM AMERICAN APPARELL MOVIE before the reading. He sounded excited about the concept for how we would do it. He also handed me a mini-keg of Heineken and walked in circles in a supermarket while I followed him and talked about it. Then we went to dinner after the reading and I chatted with Sandy and another of Tao's friends.

I also got to meet Ken Baumann for the first time. He was a nice person. I hope we can hang in the coming weeks. I'd love to have him act in SHOPLIFTING.