Documentary on Religious Extremists in Florida

Video link was passed on via Joanie. Here is her full note:

"Below you'll find a link to Sofian Khan's 20 minute stand-alone short on Islam and the radicalism existing on both sides of the fence. I've worked for Sofian a few times since moving to New York and think he's an exceedingly talented documentarian."

"If the piece speaks to you, please help to get the link out. If you know anyone in the broadcast news world-- a producer, correspondent or anyone with
ties to a network-- it would be especially wonderful of you to send the link to them!" 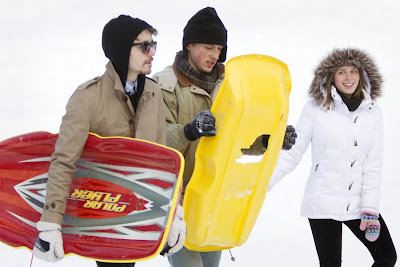 SHOPLIFTING FROM AMERICAN APPAREL is getting ready to be shot very shortly. Right now we’ve raised about 7K of the 10K we need. That means we still need help to get to our final goal on IndieGoGo. If you haven’t made a donation, viewed the updated trailer, or passed on the link to fellow indie film lovers, we need your help.

How can I help exactly?

Take a look at our trailer, order an advanced DVD or tee shirt, or share the following trailer link (here or directly below) on your Facebook page, Tumblr, etc. Any type of word of mouth from you will make a huge difference in bringing the film it into being.

Someone said you might need actors in Hollywood? When will that be?

We might need extras and some speaking roles for a shoot on May 16th. We’re still working out details, but audition notices will be posted on the Sangha Films website and on the AMDA bulletin board.

What is the latest with THE HUMAN WAR?

We placed third in the Appalachia Film Festival. Right now Mark Parsia is currently putting the film through a second edit, and we will hit the film festival circuit in full force once we have a polished film.

Here is the trailer for THE HUMAN WAR.

You’ve gotten a lot of press for SHOPLIFTING?

That’s right. If you’d like to read the press the film has already generated, I’ve listed a bunch of interviews with various magazines that have already gone to print.

Thank you to everyone for your help in spreading the word these last couple months. This film wouldn’t be possible without all of you who have helped thus far.

I am going running today. I have to run the whole weekend. I don't have much time with the new job that I'm working during the week. I have to wake up at 5:30 a.m. everyday to drive into Los Angeles. That takes a lot out of me, so by the time I get home, I don't feel like doing anything. That's why I have to run on the weekends. I also need to try and exercise during the week, but that's going to be hard. I'll try though.

Aside from the need to exercise, I have to start getting things ready for the film shoot in June. That means I'll have to secure all the locations, and make sure I have enough actors for every scene. That's a stressful job, but I'll probably have to start on that this week. We are almost at 7K in the fundraising on IndieGoGo. That's much less than we need, but I'm hoping more will come through in the next month.

Yesterday, I called Urban Outfitters to see if we could film there. They said that no one is allowed to film in their stores. That is strange because the manager of the store I went to in Los Angeles said that it's been done before. I'm not going to push it though. I think I'm going to try and find a store in Long Beach. People seem more agreeable there.

What is left to shoot?

The Jail and Shoplifting Scene are the most difficult. I will have to wait for Drew to figure out if we can shoot on a sound stage that he knows about. Then I'll have to cast some actors for the jail scene. That means I have to do auditions this month. This'll be interesting.