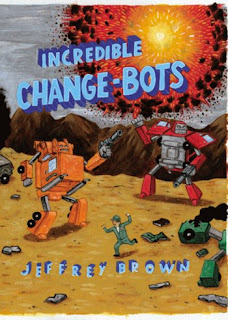 JEFFREY BROWN is best known for his bittersweet autobiographical graphic novels, and in just a few short years his impressive body of work has already garnered high praise from the likes of McSweeney's, NPR, and Time… A true artist, who brings together intimacy with imperfection, Brown's most recent graphic novel, The Incredible Change-Bots, continues to reshape the way comics are drawn, told, and made accident.

Pirooz Kalayeh: The new book is due out in July. I'm pretty excited. What made you want to do a satire on Transformers, Go Bots, and all the rest?

Jeffrey Brown: I grew up as a big fan of the Transfromers cartoon and toys and comics, and I remember my brother and I drawing these Transfromers comics, some of the first comics I drew (mine is unfortunately missing now). They were really funny, so partly I was trying to recapture that. Also, anyone who looks at my comics will probably realize that I'm not a big car guy - I can't identify vehicles, I don't know what different cars are, I draw them almost all the same. So I thought it'd be funny for me to draw all these vehicles because they'd be so inherently flawed.

PK: Mmmm, yes. Flawed things are so wonderful. I often think about Jackson Pollock's statement that he denied the accident in his work, and see how allowing it is so much more nutritious for its freedom and possibility in my own. Would you say your taste is aligned with the flawed image for this reason? Does it have more to do with your overall perspective of humanity?

Jeffrey Brown: I think there's another quote, maybe from Marcel Duchamp, along the lines of the idea that there are no mistakes in art, only accidents, which is how I like to think of it. I want there to be a very real, human presence in my work – to know that these are personal creations. I think there's an intimacy that comes with that. I also like the work to reflect the fact that as people we're not perfect, so the form of the work itself is another comment or parallel to that effect. There's also the idea that aesthetically, when something is flawed it can be more interesting. Imperfections can be differences, escapes from the expected or the commonplace.

PK: I hear you. How do you decide how accidents will be edited within the comic book form? Do you even edit given your predilection for accident as art?

Jeffrey Brown: You can see in Clumsy I barely edited - actually I didn't edit, or if I did I edited right on the page. That was also in keeping with the theme of the book - being clumsy in a relationship, knowing you're screwing up but not being able to help yourself, trying hard but inevitably there are mistakes. I'm more careful now, and I either make fewer accidents or I can cover them up better. I tend to only go back and fix things that really bother me, or that I feel would really detract from the focus of the comic. It also varies from project to project - the non-autobiographical work tends to have a different motivation behind it, so it tends to be edited a little more.

PK: How is the motivation different for the non-autobiographical work?

Jeffrey Brown: With the autobiographical work, I have specific things I'm trying to say, specific ideas I'm trying to express, mostly about life and human experience and what it all means, and so everything in the comics is coming together toward that goal of expression. With the other comics, I'm letting my mind wander quite a bit, and it's more about the jokes, ideas that strike me as funny, whatever thoughts happen to come to mind. So that work is less focused on any deeper meaning, and maybe more entertainment oriented. PK: Do you find that the process of creating your autobiographical comics were more of a push towards cathartic healing in some sense, and that the non-autobiographical pieces are now an exercise of your craft and experience coming out of this? If so, what would say has been the major benefit in your personal and artistic growth with the entertainment oriented comics?

Jeffrey Brown: The autobiographical comics have never been purposefully cathartic, were never specifically intended to have any kind of psychological benefit to myself, other than coming to some understanding of the world. When I first started drawing autobiography I was pretty happy and in love, actually. The entertainment oriented comics are certainly a place where I tend to experiment and play with form more, but there's still things I'm thinking about there...in the best parts there's some deeper thinking going on, usually about less personal issues.

PK: Like how to kill off most of the characters in Change-Bots? Word is that most of the Change-Bots go to Awesomebot and Fantasticon heaven. Did you plan out the story line to proceed in this fashion, or was it something that was part of your continued accident-approach method? Do you even write plots before a comic begins?

Jeffrey Brown: For this book I had the general plot and basic elements scripted out before hand, but a lot of the details just happened as I went along. Sometimes killing off a robot was just to avoid having to draw them anymore, but maybe it got to the point where there was this kind of liberated feeling, that I could do whatever I wanted to these characters. Obviously, in the autobiography, there's a lot less control over that sort of thing. So the Change-Bots definitely has a bit of that accident approach, but more in terms of story, in that sometimes I'd make something happen and then figure out how to resolve it later on.

Change-Bots, Incredible Change-Bots
First they're robots, and then you turn around and they're vehicles
Driving all over the place

Robots from a distant planet
come to Earth and make a mess of it
Change-Bots, Incredible Change-Bots!

"You need to make a music video," he said.

"Sure. I can do that," Robert smiled.

Then he started dancing. The rest is celluloid history as they say.

PK: Is control/inspiration a result of where the drawing decides to go or the text? My guess is that since you have a history in both fine arts and creative writing that both these mediums end up being interchangeable as far as inspirational transitions. Is this the beauty of the comic form, that when you're stuck on what to draw you can rely more on the text to guide you and vice-versa?

Jeffrey Brown: With the autobiographical comics, they're pretty well planned out in advance and basically dictated by the stories. With the other comics I go back and forth a lot more - especially with something like Change-Bots, there's some parts where I just had an idea for something I wanted to draw, so drawing things that look cool changed the look of the story slightly at some points. I don't know that I ever get stuck when I'm at the point where I'm drawing the comics, usually getting stuck happens when I'm working on a script, and it's maybe working things out in my head of how the comic would go visually that leads to figuring out what direction the text needs to go in. PK: What are some of the best parts of Change-Bots?

Jeffrey Brown: I think the first battle on Earth between the Awesomebots and Fantasticons is pretty funny, and the whole developing friendship between Balls and the humans, Monkeywrench and Jimmy Junior. And the climactic end battle at the reservoir, of course.

PK: You had me at Awesomebots. The book sounds fantastic. I have it pre-ordered now. I can't wait. What about the rumors that you'll be doing a regular series called Sulk. What's this all about and when can we expect the first issue to come out?

Jeffrey Brown: Sulk will collect a lot of random stories - autobiographical, parody, more Bighead, etc - kind of like Feeble Attempts or Miniature Sulk. The plan is to do 3 or 4 issues a year, each one being 32 pages. It'll probably start next year, although there's a possibility the first issue will come out toward the end of this year. My main/big projects the next couple years will be a couple of big autobiographical books, Little Things coming out in 2008 and Funny Misshapen Body in 2009, so Sulk will be a way to balance out with more of the fun stuff, and a place to put a lot of the smaller stories that aren't big enough for their own books. PK: What was the first transformer you owned? Was there one you kept going back to in your memory during Change-Bots?

Jeffrey Brown: Probably Windcharger, the little red car minibot. I never actually owned Optimus Prime or Megatron...nor did I complete my Devastators collection, though I had and loved the bulldozer guy. And despite my love of dinosaurs and literal phobia of insects growing up, for some reason I had a bunch of Insecticons and no Dinobots. Strange.

JEFFREY BROWN is best known for his bittersweet autobiographical graphic novels, and in just a few short years his impressive body of work has already garnered high praise from the likes of McSweeney's, NPR, and Time. Heartfelt and sincere, these memoirs of failed relationships have set a new standard in autobiographical comics and established Jeffrey Brown as one of the leading cartoonists of his generation. A versatile talent, his first graphic novel, Clumsy, appeared seemingly out of nowhere to grab the attention of cartoonists, critics, and comics fans alike. Since then, his works have included fiction, gags, and parodies, as well as further examinations of the human condition. His eleven -- count 'em, eleven! -- Top Shelf publications are featured here, and his comics have also appeared in a host of anthologies from McSweeney's to the Drawn & Quarterly Showcase, as well as local newspapers like the Chicago Reader and NewCity. Brown has been featured on NPR's This American Life and created a short animated music video for the band Death Cab For Cutie. Future work includes a continuing mix of autobiography, gags, satire and parodies, including The Incredible Change-Bots.
Posted by Pirooz M. Kalayeh at 5:40:00 AM