Six premieres, Six Cities. Buy your seat or the screenings will not happen!

SHOPLIFTING FROM AMERICAN APPAREL is a docudramedy that melds Tao Lin's autobiographical novel about getting arrested with a film crew’s misadventures with indie filmmaking.

Tickets are currently being sold at www.local-screen.com for the following cities:

Q&A and prize giveaways at each screening! Click city below to buy tickets!!

Each screening will include prize giveaways, special guests, and a Q&A with zen teacher and actor Brad Warner and director Pirooz Kalayeh.

The hip are bored and they want you to know it. Part absurdest documentary and part cinematic realism, Shoplifting from American Apparel moves between the life of the actual writer who has written the popular novel on which the film is based to the mishaps of a ragtag film crew who offer each other challenges to make certain scenes despite unforeseen creative roadblocks.

SHOPLIFTING FROM AMERICAN APPAREL TO PLAY SELECT THEATERS ACROSS AMERICA 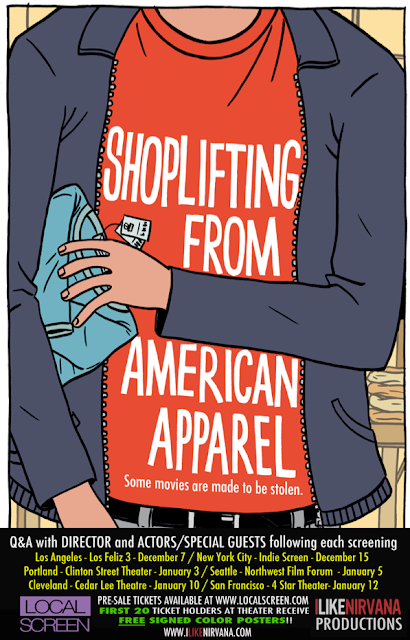 SHOPLIFTING FROM AMERICAN APPAREL will now be playing in select theaters across America. The theaters are as follows:
We will begin pre-selling tickets on October 29th at localscreen.com.

How is this possible? 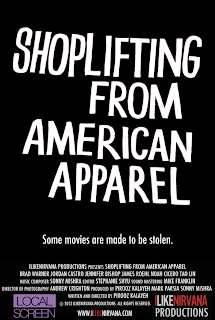 The fine folks at Local Screen contacted us to run some beta testing with a new distribution model: play anywhere a fan requests via the Internet.

Once a request is made, tickets for the film go up for sale on the Local Screen website. If the number of tickets needed to insure the rental of the theater are sold--usually between 20-60 tickets, depending on the size of the theater--then the film will play the city requested.

To kick off this tour, SHOPLIFTING will screen across America at six locations prior to opening up the venue for fans. Like the fan model, we will be pre-selling tickets to insure the theater rental is secured. 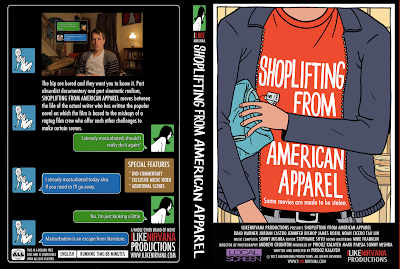 For these first screenings, we will personally be attending the events to do a Q&A, give away free signed full color posters (first 20 ticket holders in line), sell DVDs and shirts, have bands, such as THE OHIOANS, DJs, tap dancers--and anything else we can come up with to make each event unique and fun.

If you're interested in joining us at one of these events/screenings, please visit Local Screen or ILIKENIRVANA PRODUCTIONS to purchase a ticket or learn more about some of our other projects.


How long will tickets be on sale?

About a month or so, but you'll want to buy tickets early because there are limited seats for each event.

When are the Q&As?

Right after the screening.

Can I get free tickets for my friends?

No, but you can buy a bunch online and give them away. That would help us get the minimum number of tickets sold to meet theater costs and increase SHOPLIFTING's exposure and potential to play other cities.

Can I buy a bunch of tickets at once?

As many as you want.

Can I request the film to play closer to me?

Yes! If the film is not playing near you, then you can request the film to play close by. Once the film goes live on the local screen.com site, there'll be an easy submission button to make a request. Just make sure you let friends know so the minimum number of tickets are purchased; it's typically a 20 ticket minimum for smaller theaters. ; )

Can I get my DVD, T-shirt, etc., if I already donated for that incentive amount to the Indiegogo campaign when I come to a screening?

Yes! Fans who donated to our Indiegogo fundraising campaign that started it all can bring a picture ID to claim relevant incentives (DVDs, etc.) at screenings. All other donaters will be mailed incentive prizes no later than January 15th, 2013.

What about digital incentives for Indiegogo donaters?

Downloads of digital incentives, such as the Paper Tree Toy and film's soundtrack will be e-mailed to donaters who qualify for those prize giveaways on November 5, 2012.

Can I buy a DVD or T-shirt if I did not donate to the campaign?

Of course. We will have lots of merchandise for sale, including books from the authors and other special guests at the different screenings.

Will DVDs or T-shirts be on sale online?

Yes! DVDs, T-shirts, and other merchandise will go on sale after December 7th on the ilikenirvana.com WEBSITE.

When will the film be available to stream online?

We're discussing that with distributors now. Stay tuned for an update.